You are here: Home / Business writing / An Interview with Karen Catlin on Language and Inclusion 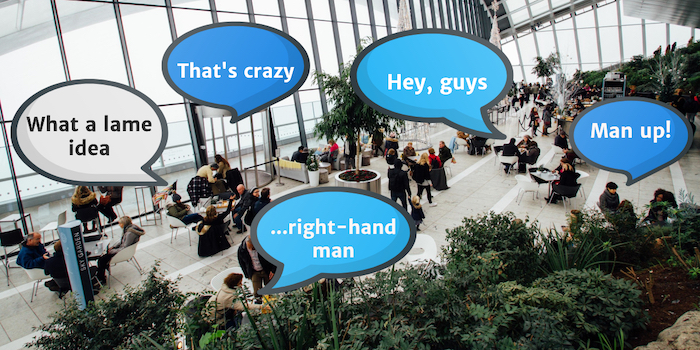 How would you feel if you walked into an office party and no one made eye contact with you or spoke with you? You’d feel unwelcome, right? Certainly uncomfortable.

Our brains experience something similar when we encounter language such as gender-specific pronouns that don’t include our own gender identity, or words that treat our backgrounds as negative or unusual. The words trigger an automatic “us/them” filtering, and we immediately sense we are not part of the speaker or writer’s world view.

For example, if you’re a woman reading a job posting that uses the pronouns “he” and “his,” you’ll sense that you are not the ideal candidate, even if the organization posting never intended to exclude women.

One writer’s careless use of pronouns can change another person’s career.

You might argue that people are too sensitive to this stuff. Perhaps that’s true, but this sensitivity may not rise to the level of consciousness. It may show up as a background discomfort, or an intuition that something isn’t a good fit.

If you’re writing or speaking and want to attract a larger audience, you don’t want to turn people away inadvertently. Your word choices may be metaphorically slamming doors in your readers’ faces, telling them they’re not welcome.

Using male pronouns in job postings is an obvious example. More subtle cases of exclusionary language happen around us all the time. In fact, most of us write and speak exclusionary words without intention, to varying degrees.

An Interview with Karen Catlin

Being a word geek myself, I connected with her to find out more. Here’s the gist of our conversation.

AJ: Has doing this work has made you choose your words differently?

KC: Writing the chapter on language was eye-opening. I knew about some of the best practices already. For example, I knew I shouldn’t use the word “guys” even though it was part of my vernacular, because it carries gender connotation. [AJ: Here’s an example from Karen’s book: Try asking a straight, cisgender man how many “guys” he dated in college, and he’ll understand the gender connotation.]

Before writing the book, I used the word “pow-wow” in work settings, without realizing how the usage could be disrespectful to people from native American cultures.

The English language has a rich variety of alternatives and synonyms for every word. Now, instead of pow-wow I use the word “huddle.” I like the team connotation that comes along with it.

AJ: How hard it is to change ingrained speech patterns?

KC: When writing, I can backspace right away if I catch myself using a word that might make someone uncomfortable. Conversation is trickier. Around my dinner table, we try to catch each other. When I make a mistake, in speech or writing, I apologize and move on. It’s a process.

AJ: You write about filtering language for gender bias, cultural insensitivity, and disabilities from standard terms like “double blind” experimentation or “whitelisting.” What’s your advice about trying to shift ensconced industry terms?

As with everything in professional life, choose your battles. The more respected you are in your field, the easier it is to introduce a new term.

Michael Lopp, when he was head of product engineering at Pinterest, used the phrase “straw dog” instead of “straw man” to refer to a draft proposal intended to generate discussion. The change is surprising and draws attention to impact of language. As the leader, he set the tone and direction through his choice of words.

Leaders can use their position of privilege to create change.

People might push back, saying, “I’ve never heard anyone complain about this being offensive.” And this is great, because now you’ve started a dialog about language and inclusion.

AJ: What advice can you offer writers who want to be careful not to exclude people?

KC: Edit yourself and learn from editors.

When working on the book, I hired a copyeditor who specializes in inclusive language and then tried to learn from those corrections.

For example, the copyeditor flagged my use of the widely accepted term “URM” to refer to Underrepresented Minorities. They suggested that lumping groups of people together into an acronym like this can be dehumanizing.

Being an ally is a journey and everyone keeps learning along this journey—myself included.

If you find this conversation interesting, I encourage you to visit betterallies.com and read the book: Better Allies: Everyday Actions to Create Inclusive, Engaging Workplaces

How and Why to Filter the Jargon

Mind Your Tone of Voice