You are here: Home / Book reviews / A Fresh Take on Networking: Friend of a Friend

Friend of a Friend by David Burkus is a fresh, research-driven book that will change the way you approach business networking for the better. Grounded in network theory, the book bypasses traditional “how to network” advice with discussions of hidden networks, super connectors, silos, and structural gaps. It offers practical guidance on becoming a more valuable member of your existing, often unseen, networks.

First, a little backstory. I’ve been a fan of David Burkus since reading his book The Myths of Creativity, which I referenced in The Writer’s Process. He wrote a testimonial for my book, which made me even a bigger fan.

Always interested in book promotion strategies, I entered the giveaway and to my great surprise won. (Because the giveaway was run by a separate service, I imagine David was as surprised as I was.) An enormous box of networking books appeared on my doorstep. This photo shows you of most (but not all) of them: 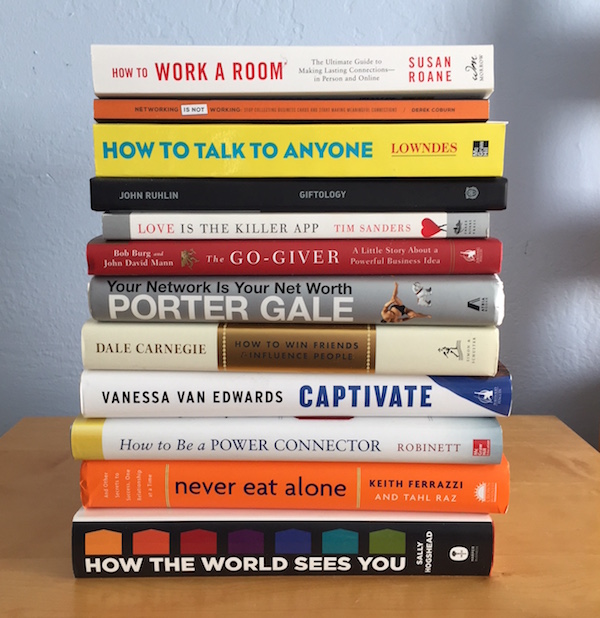 I started reading through the stack with the thought that I’d do a blog review series. It may yet happen, but to be honest, I ran out of steam. They started running together in my head, despite my taking notes. Really, the whole “business networking” topic seemed like it was pretty well covered.

Thank heavens, I was wrong.

With Friend of a Friend, David Burkus takes a different approach. This book isn’t about working the room or eating meals with other people. No, it’s right up my research-geeky alley. It starts with network theory, elaborates with research, and then concludes each section with practical and inspiring advice.

Seriously, this is the networking book that even introverted geeks can enjoy.

Without recapping the book, here are a few of the things you’ll learn:

This quote, from the end of the book, summarizes the unique perspective of the book:

We don’t have a network; rather, we’re embedded inside a massive network that we must learn to navigate.

This book is a great guide to navigating the networks in which we all participate.