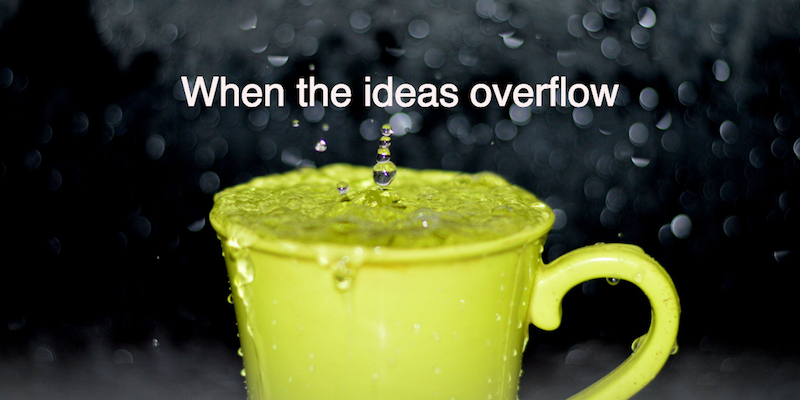 How do you cope when writing ideas rain down faster than you can catch them? How do handle a creative Muse that delivers batches of writing ideas at inopportune times, like packages that pile up on your doorstep while you’re on vacation?

Like summer fruit, inspiration can spoil if left unattended too long.

Sometimes inspiration hides from writers, other times it comes all at once. While this may seem like a good problem to have, when you’re in the midst of the flood, it can be overwhelming.

My new friend Peri described the situation as follows:

“I awakened this morning after a night of fitful coughing, vowing that I would surrender to the demands of a miserable cold and just rest. Moments later, I got up to drink some water and got caught in a rainstorm. Ideas were pelting me so hard and fast that I couldn’t capture them all for a morning free write or the so-called future (sometimes aka ‘never’) file.”

Although these downpours are rare for me, I understand her problem. My personal Muse likes to pipe up with ideas at awkward times, like:

The problem isn’t having too many ideas – it’s retrieving them later, when you’re ready to write.

How do you store those ideas so they are available later?

The standard advice is to carry around a notebook or use a note application on your phone. It’s good advice, as far as it goes. But sometimes, those little reminders you make for yourself aren’t enough. As Peri writes,

“Sometime the notes I jot down are vague or strange, and I have no idea how to return to the particular and nuanced threads my busy brain was following.”

Yep – I’ve been known to scribble words on paper, only to be completely mystified by them a few days later.

The half-life of a creative spark is remarkably short.

Here are a few ideas for preserving your creative inspiration.

Capture the Outside Details

Writing down a single word or two may not be enough to restore the full inspired idea to your head. Memory doesn’t work that way.

According to Benedict Cary, author of How We Learn:

“The brain does not store facts, ideas, and experiences like a computer does, as a file that is clicked open, always displaying the identical image. It embeds them in networks of perceptions, facts, and thoughts, slightly different combinations of which bubble up each time.”

Take advantage of those networks of perceptions to retrieve the memory of the idea. When jotting down the bones of the idea, also note other things about the context in which it occurred. Where were you when you thought of this idea? How did you feel? What other things had you been thinking about or working on?

These contextual details may help you retrieve the complete idea later. If nothing else, they can put you back into a similar state of mind.

Use a Voice Recording

Instead of writing your insight down, turn on the recorder on your phone and talk about. Dedicate one minute to capturing the thought. You will probably record more detail and structure than you would simply writing down a few words.

As a bonus, talking through the concept before you put it aside makes the memory of it easier to retrieve.

Creative insights are the products of associative thought processes that link disconnected things. You may need to get into a similar state of mind to recall the entire concept.

When sitting at the desk in “hard work” mode, you’re in a different mindset than you were when you came up with the thought. So change it up. If your scribbled notes leave you cold, try changing your environment.

Get away from the office. If it’s convenient, return to the activity you were doing when you first got the idea. Otherwise, take a walk. Put your mind in a state of open attention while gently pondering the words or idea.

Be patient, but don’t wait too long to do this.

The research on learning shows that even when we try to memorize something, it fades pretty quickly – a day or two for your first exposure to a fact.

Even if you write down a word or two, don’t rely on those notes for too long. That leads me to the next idea:

Here’s another reason to have a committed practice of writing each day – you can use the regular session to write down and explore those bits of inspiration that popped up since the last time, or to explore the results of a flood of creativity.

You may find that some of the ideas that seemed brilliant are not worth pursuing. That’s okay. The act of working through them reminds your creative self to keep the flow of ideas coming.

How We Learn: A Book Review